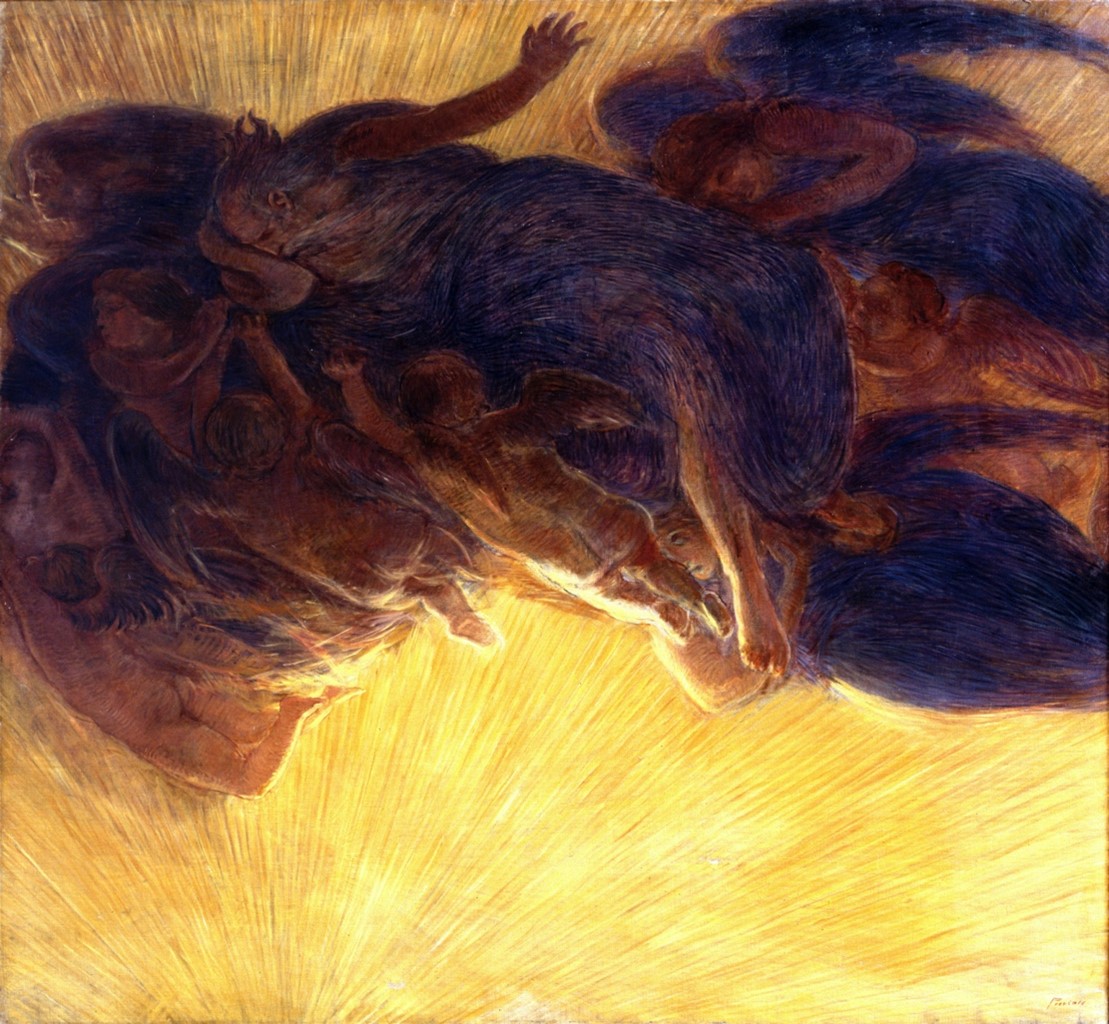 This magnificent painting by Gaetano Previati shows the heavenly hosts as part of the light that appeared at the beginning of Creation. Some ancient sources assert that the heavenly hosts — variously described as including the angels, the sons of God, and/or the souls of humanity — were part of that light.1  Wesley Williams explains:2

The pneumatikos or spiritual first Adam, born on the first day, is associated [with] the light of Genesis 1:3. The latter reading is based on a pun on the Greek word phōs, used in the [Septuagint] translation of Genesis 1:3 meaning both “light” and “man.”3  Thus, the product of God’s command, “Let there be light (phōs),” was a divine Light-Man, an anthropos enveloped within and consisting of light. This interpretation is Jewish and can be found as early as the second century BCE.

In this Essay, we will discuss the spiritual creation of the Garden of Eden and the origin of the spirits of humankind before the foundation of the world. We hope that the discussion will shed light on Moses 3:5, one of the most misunderstood verses in the Creation chapters:

Before there were any troublesome weeds, before grain replaced the fruits of the Garden of Eden, before God caused the needed rain to fall, and before man was commanded to till the ground, I, God, made all things spiritually, and created the children of men in heaven. No flesh — that is no mortal beings, whether people, beasts, fish, or birds — yet dwelt on the earth.

The explanation provided in this verse forms the opening bracket to the account that ends in Moses 4:29 with the expulsion of Adam and Eve from the Garden. The emphasis on how easy their life was before they left the perfect, terrestrial world in which they had been placed highlights the fact that neither the troublesome weeds (that depend on rain) nor the life-sustaining grains (that depend upon human cultivation) would make their appearance until after the Fall, when humankind became subject to toil, grief, and death.

“For I, the Lord God, Created All Things, of Which I Have Spoken, Spiritually”

In my personal view there is no scriptural basis for the notion that allusions to “spiritual creation” in Moses 3:5 describe a separate creation of individual entities made of “spirit” corresponding to each created thing, including, e.g., rocks, plants, and the earth itself. Instead this verse describes the premortal creation of “all things” that God had spoken about in their spiritual state, including the premortal spirits of humankind and some other forms of life, the physical creation of Eden, and everything it contained. This is consistent with the view of Elder Bruce R. McConkie, who “conceded that the word ‘spiritual’” in Moses 3:5 has “a dual meaning and applies to both the premortal life and the paradisiacal creation … [while emphasizing] that the ‘more pointed and important meaning’ is that of a ‘paradisiacal creation.’”4  The paradisiacal creation resulted in a world of terrestrial glory, the same glory to which the earth will be restored during the Millennium.

Everything placed in the Garden of Eden was considered “spiritual” in the sense that it was in a state of relative perfection before the Fall.5  We are told in Moses 3 that man, the trees, and the animals became “living souls” when they were formed out of the elements of the paradisiacal world.6  However, the statement that all these things were created from spiritual elements does not necessarily imply that they each possessed individual spirits. Only humans and animals are said in scripture to possess individual spirits that preexisted their physical bodies.7

Some readers see the planning process for the formation of the heavens and the earth as resulting in a “blueprint” that can be taken as constituting a sort of spiritual creation. Though advance planning doubtless took place, such a process is never referred to in scripture “spiritual creation.”

Note that the period of time mentioned in Doctrine and Covenants 77:6 refers to “the seven thousand years” of the earth’s “temporal existence,” rather than to the period of its existence in a spiritual state. Thus, this seven-thousand-year period does not include the timeframe of the physical creation of the terrestrial world in which Adam and Eve lived, nor the time that led up to their Fall. Therefore, this rough description of time periods does not rule out a creation process for the earth that began billions of years ago.

Death Before the Fall

Scriptural descriptions of the Garden of Eden seem to imply that there was something different about the way “time” was perceived before and after the Fall.8  While it is logical from our perspective to speak of “beginning” phases and “last” phases of God’s work, from his eternal perspective the “works have no end, neither beginning” but are “one eternal round.” Besides this aspect of “time,” something about the “state” and “sphere”9  of the Garden of Eden was different. Lehi explained that had it not been for the Fall, “all things which were created must have remained in the same state in which they were after they were created; and they must have remained forever, and had no end.”10  Some take this verse as an argument that death on earth did not occur before the Fall. However, this interpretation seems to be based on a misunderstanding.11

Differing views have been expressed by prophets and apostles with regard to the question of death before the Fall. For example, President Harold B. Lee gave the following description of the effects of Adam and Eve’s transgression on the rest of creation:12

Besides the Fall having had to do with Adam and Eve, causing a change to come over them, that change affected all human nature, all of the natural creations, all of the creation of animals, plants — all kinds of life were changed. The earth itself became subject to death. … How it took place no one can explain, and anyone who would attempt to make an explanation would be going far beyond anything the Lord has told us. But a change was wrought over the whole face of the creation, which up to that time had not been subject to death. From that time henceforth all in nature was in a state of gradual dissolution until mortal death was to come, after which there would be required a restoration in a resurrected state.

President Lee’s clear statement about the effects of the Fall is difficult to reconcile with the presence of ancient fossils that unquestionably predate man’s arrival, arranged in progressive complexity in the earth’s strata. Elder James E. Talmage of the Quorum of the Twelve, a geologist by training, expressed the following observations in 1931:13

The oldest … rocks thus far identified in land masses reveal the fossilized remains of once living organisms, plant and animal. … These lived and died, age after age, while the earth was yet unfit for human habitation. From the fossilized remains of plants and animals found in the rocks, the scientist points to a very definite order in the sequence of life embodiment, for older rocks, the earlier formations, reveal to us organisms of simplest structure only, whether of plants or animals. These primitive species were aquatic; land forms were of later development.

Those who, like President Lee, have made statements strongly expressing the view that no death existed on earth before the Fall should not be portrayed as intrinsically unsympathetic to science, but more fundamentally as resisting any views that compromise authoritatively expressed doctrines relating to the Creation, the Fall, and the Atonement. Likewise, scientifically-minded people of faith such as Elder Talmage are not seeking to subordinate the claims of faith to the program of science, but naturally desire to circumscribe their understanding of truth—the results of learning by “study and also by faith”14  — into “one great whole.”15

In 1910, the First Presidency affirmed that to the extent that demonstrated scientific findings can be harmonized with “divine revelation [and] good common sense,” they are accepted “with joy.”16  In this regard, Elder Lee spoke approvingly of a story recounted by Latter-day Saint scientist Harvey Fletcher about President Joseph F. Smith’s reply to questions posed to him at BYU about the topic of evolution:17

After listening patiently he replied: “Brethren, I don’t know very much about science. It has not been my privilege to study… deeply… any of the sciences, but this I do know, that God lives, and that His Son instituted this church here upon the earth for the salvation of men. Now Brethren, you have that testimony, and I’ve heard you bear it. It’s your job to try and see how these seeming difficulties can be overcome.”

“For in Heaven Created I Them, and There Was Not Yet Flesh upon the Earth”

Though some readers have seen Moses 2:26-27 as a reference to the creation of the spirits of humankind, Elder Joseph Fielding Smith commented:18

There is no account of the creation of man or other forms of life when they were created as spirits. There is just the simple statement that they were so created before the physical creation. The statements in Moses 3:5 and Genesis 2:4 are interpolations thrown into the account of the physical creation, explaining that all things were first created in the spirit existence in heaven before they were placed upon this earth.

Joseph Smith taught that there is some aspect of the spirit’s existence that was not created, although the exact nature of this eternal part of man has not been authoritatively settled.19  In the Book of Moses, the fact that all mankind existed as spirits in “heaven” before they came to earth is stated in simple terms.20  The Book of Abraham relates that when God breathed the “breath of life” into man, it meant that He took Adam’s spirit and placed it into his body.21

While little is said about the process by which the spirits (and bodies) of humankind came to be, more detail is given about social organization and preparatory events that took place in the premortal life.22  The Prophet summarized:23

Thus, “Father Adam, the Ancient of Days and father of all, and our glorious Mother Eve,” among the “noble and great ones” who excelled in intelligence in their premortal life, were foreordained to their mortal roles.24  Having received perfect physical bodies of a terrestrial glory, Adam and Eve were placed in a specially-prepared proving ground where, until the time of their transgression, they would live in the spiritual state that prevails in terrestrial worlds.25

Fossum, Jarl E. The Name of God and the Angel of the Lord: Samaritan and Jewish Concepts of Intermediation and the Origin of Gnosticism. Wissenschaftliche Untersuchungen zum Neuen Testament 36. Tübingen, Germany: J. C. B. Mohr (Paul Siebeck), 1985.

———. Teachings of the Presidents of the Church: Harold B. Lee. Salt Lake City, UT: The Church of Jesus Christ of Latter-day Saints, 2000.

3 This pun has been described in more detail by several modern scholars. See, e.g., this concise explanation by Jarl Fossum: “G. Quispel has argued that the myth of the origination of the heavenly Man as the primordial light presupposes a pun on phōs, meaning both ‘man’ (φώς) and ‘light’ (φῶς): ‘And God said: ‘Let phōs come into being!’ And phōs came into being’ (Genesis i.3)” (J. E. Fossum, Name of God, p. 280).

7 Doctrine and Covenants 77:2. Regarding the scope of the word “creature” in this verse, including the question of whether every form of microscopic life is associated with an individual spirit or whether every particle of matter is “alive” in some sense, see ibid., p. 199 n. 3–10. Note that in Moses and Abraham the term “living creature” is reserved for animals, not plants.