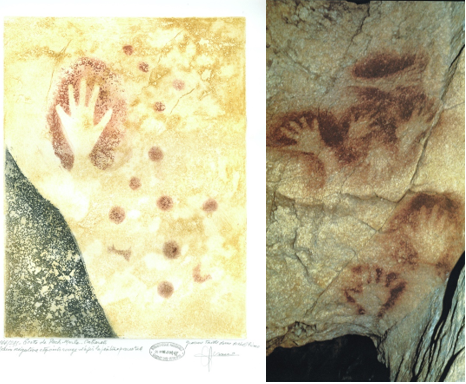 The beautiful copper engraving above by Noël Pisano was made from meticulous observation of one of the many prehistoric paintings in the caves of Pech-Merle, in the heart of the massif central of southern France.1 Although the cave walls and ceilings contain many images of greater sophistication, this simple tracing of a single hand is singularly arresting. Its original is solidly dated to 25,000 years ago, yet in standing to examine it in close quarters, the gap of time between oneself and the skilled artist is suddenly erased, and we are brought to admire the beauty and subtlety of his technique. To create this work, the artist had to crawl into the cavern by candlelight. After contemplating his design and choosing the ideal place for its execution, he placed his hand on the wall to serve as a stencil. To create the colored outline, he projected pigment onto the rock by blowing, perhaps with the help of a sprayer held tight in his lips.2 This well-honed technique allowed a negative of the hand, surrounded by symbols whose meaning is now is lost to us, to be preserved tens of thousands of years later as an ancient snapshot, the sole remaining memory of the life of this individual.

In another chamber, we find what is undoubtedly a family portrait. Fourteen hands of adults and children are found together here, in a deep, submerged section of the cavern now accessible only during periods of drought. The creators of such relics “almost certainly intended them to last for generations.”3 Elsewhere in the cave, visitors are moved to discover a dozen footprints of an adolescent boy drawn into this place by unknown rites, hostile forces of nature, or the mere boldness of curiosity — and preserved intact for twelve thousand years in the clay of the cavern floor.4a>

As a witness of the great effort and care sometimes made to honor the dead in this era, Hariri notes the 1955 discovery in Sungir, Russia of:5

a 30,000 year-old burial site belonging to a mammoth-hunting culture … [Among other things, i]t contained two skeletons, buried head to head. One belonged to a boy aged about twelve or thirteen, and the other to a girl of about nine or ten. The boy was covered with 5,000 ivory beads. He wore a fox-tooth hat and a belt with 250 fox teeth (at least sixty foxes had to have their teeth pulled to get that many). The girl was adorned with 5,250 ivory beads. Both children were surrounded by statuettes and various ivory objects. A skilled craftsman (or craftswoman) probably needed about forty-five minutes to prepare a single ivory bead. In other words, fashioning the 10,000 ivory beads that covered the two children, not to mention the other objects, required some 7,500 hours of delicate work, well over three years of labor by an experienced artisan!

Hugh Nibley, with his deep love of God’s creatures,6 had great sympathy for these ancient individuals and pondered long and hard about how their stories fit in with those of Adam and Eve. For a thoughtful perspective on this issue, we can do no better than to cite him directly:7

The philosopher Arthur Schopenhauer, in his Essay on the Christian System, said that the two fatal flaws of Christianity were (1) denying spirit and mind to any other creatures but ourselves and (2) allowing life on no other world but our own. …

Do not begrudge existence to creatures that looked like men long, long ago, nor deny them a place in God’s affection or even a right to exaltation — for our scriptures allow them such. Nor am I overly concerned as to just when they might have lived, for their world is not our world. They have all gone away long before our people ever appeared. God assigned them their proper times and functions, as He has given me mine — a full-time job that admonishes me to remember His words to the overly eager Moses: “For mine own purpose have I made these things. Here is wisdom and it remaineth in me.”8

It is Adam as my own parent who concerns me. When he walks onto the stage, then and only then the play begins. He opens a book and starts calling out names. They are the sons of Adam, who also qualify as the sons of God, Adam himself being a son of God. This is the book of remembrance from which many have been blotted out.

From a similar perspective, it is significant that the Book of Mormon, as a history of those who were Nephites by lineage or “adoption,” records only incidentally the story of the Lamanites and their associates.9 So also the Book of Moses tells us very little about the history of the Cainites or of the children of Adam that were born before Cain and Abel10 who “followed Satan by choice and were disqualified as sons of God.”11 The account instead focuses on the inauguration of temple ordinances among the righteous, which began, as Nibley indicates, “when God set them apart, gave them a blessing, gave them a new name, [and] registered them in the new Book of the Generations of Adam.”12

In light of what scripture tells us, how do we account for the results of genetic studies indicating that every person who has ever lived on earth is descended from a common population of, perhaps, 10,000 founders who lived 100,000 to 150,000 years ago — long before Adam and Eve entered mortality?13 Drawing on the richer sources of scripture produced through modern revelation, Nibley raises a series of questions with an eye to finding scriptural support for surviving non-Adamic and non-Noachian lineages that might help explain such findings:

What about those people who lived before Cain and Abel?14 What about those who disappeared from sight?15 What about those who were not even warned of the Flood?16 … What about the comings and goings of Enoch’s day between the worlds?17 Who were his people … ?18 … What about the creatures we do not see around us?19 Speaking of Noah, … “the Lord said: Blessed is he through whose seed Messiah shall come.”20 Methuselah boasted about his line as something special.21 Why special if it included the whole human race? These blessings have no meaning if all the people of the earth and all the nations are the seed of Noah and Enoch. What other line could the Messiah come through? Well, there were humans who were not invited by Enoch’s preaching.22

Nibley no doubt was wondering whether some of these shadowy peoples described in scripture might be neither descendants of Noah nor of Adam but rather distantly related contemporaries whose descendants may have mixed at various times with the Adamic lineage.23 Of relevance is the reminder by Ryan Parr that blessings promised through of descendance from patriarchs such as Abraham, Isaac, and Jacob are to be ultimately confirmed through the making and keeping of sealing ordinances and associated covenants, not by genetics, since specific “nuclear DNA finding its way from any one of these progenitors to any descendant of today is extremely unlikely from a biological perspective.”24 Happily, the promises made to the faithful posterity of the patriarchs are not about inheriting fragments of Abrahamic DNA but rather about receiving a fulness of Abrahamic blessings, assured in the end through the keeping of covenants.25 Otherwise, the doctrines that describe the possibility of adoption into the Abrahamic lineage would be meaningless.26

Population geneticists, whose discipline involves the use of mathematical tools to reconstruct the history of populations for animals, plants, or bacteria, look at … facts about the human genome and conclude that they point to all members of our species having descended from a common set of founders, approximately 10,000 in number, who lived about 100,000 to 150,000 years ago. This information fits well with the fossil record, which in turn places the location of those founding ancestors most likely in East Africa.

At the DNA level, we are all 99.9 percent identical. That similarity applies regardless of which two individuals from around the world you choose to compare. Thus, by DNA analysis, we humans are truly part of one family. This remarkably low genetic diversity distinguishes us from most other species on the planet, where the DNA diversity is ten or sometimes even fifty times greater than our own. An alien visitor sent here to examine life forms on earth might have many interesting things to say about humankind, but most certainly he would comment on the suprisingly low level of genetic diversity within our species.

Collins is noted for his leadership of the Human Genome Project. Currently, he is director of the National Institutes of Health (NIH). A critic of both Young Earth Creationism and Intelligent Design, he is a proponent of theistic evolution or evolutionary creation, and describes himself as a “serious Christian.” The well-known atheist “Christopher Hitchens referred to Francis Collins as a ‘Great American’ and stated that Collins was one of the most devout believers he had ever met … [Hitchens said] that their friendship despite their differing opinion on religion was an example of the greatest armed truce in modern times” (https://en.wikipedia.org/wiki/Francis_Collins#Christianity [accessed January 18, 2016])

19 It is unclear who Nibley is referring to, unless he is talking about lines of hominids who have become extinct.

In some models Adam and Eve are thought of as two of the members of a small population of humans and that through the course of time as generation followed generation, their descendants spread through the population and other lines died out such that today everyone has genetic material from these two. This view attempts to place Adam and Eve in Genesis 1 among an en masse creation of humans and still retain the idea that Adam and Eve are the parents of us all. It affirms that Adam and Eve were (among) the first humans and that (through a complex process) we are all descended from Adam and Eve. Though it looks nothing like the traditional biblical interpretation, it makes similar affirmations while at the same time accommodating common descent and affirming that the history evident in the genome actually took place.

With reference to a much earlier time than the era of Adam and Eve (no later than approximately 30,000 BCE), there is a growing consensus among researchers that there was a limited amount of interbreeding between the ancestors of today’s humans and Neanderthals that led to modern humans carrying 1-4% of Neanderthal genes (Interbreeding?, Interbreeding?). The authors of one study believe they have “pinpointed the skeletal remains of the first known human- Neanderthal hybrid. … The finding came from northern Italy, where some 40,000 years ago scientists believe Neanderthals and humans lived near each other, but developed separate and distinctly different cultures” (500,000-Year-Old Neanderthal, 500,000-Year-Old Neanderthal). Other researchers “suggest that interbreeding went on between the members of several ancient human-like groups living in Europe and Asia more than 30,000 years ago, including an as-yet unknown human ancestor from Asia” (E. Callaway, Ancient Humans).

26 Of course, the chances that someone on earth today is not already a descendant of Abraham are vanishingly slim. See L. Funderburg, Changing Face for a vivid photo essay illustrating the rapid growth of multiracial self-identification in America since it was first included in the US Census in 2000.