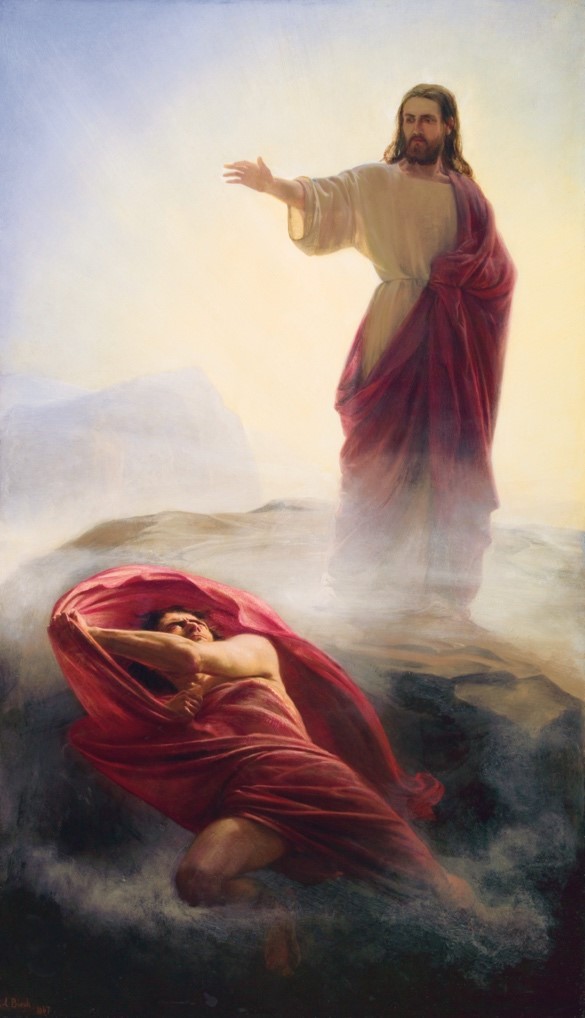 In Moses 1:21 we read the dramatic culmination of Moses’ confrontation with Satan: “And Moses received strength, and called upon God, saying: In the name of the Only Begotten, depart hence, Satan.” Carl Bloch’s dramatic painting of Jesus’ temptation in the wilderness above parallels Moses’ encounter with Satan. The placement of the prostrate adversary at the feet of Savior recalls the prophecy that the head of the serpent would be crushed beneath the heel of the seed of the woman—meaning Jesus Christ.1

In this Essay, we will describe the defeat of Satan as portrayed in Moses 1:12–23 and the Apocalypse of Abraham (ApAb). Though the general similarity between the type scenes depicted in Matthew 4 and Moses 1 is indisputable, the detailed resemblances between ApAb and Moses 1:12–23 are even more striking.

Satan disrupts the worship of God. Recalling Satan’s encounter with Christ in the wilderness,2  the Adversary tempts the prophet—in his physically weakened state—to worship him (Moses 1) or, in the case of ApAb, to “Leave [Yaho’el] and flee!” In the Book of Moses, the title conferred by Deity on Moses as a son of God is explicitly challenged by Satan, who calls him a “son of man.”3

According to David Halperin, Satan’s tactics to deceive Abraham are a “last-ditch effort to retain his privileged place in heaven.”4  If he can persuade Abraham “not to make his ascent, he will perhaps be able to keep his own privileged status.”5

Satan’s identity is questioned. Each prophet asks his adversary for credentials, which, not unexpectedly, he fails to provide.6  In the Book of Moses, the prophet questions Satan directly. By way of contrast, in ApAb, the angel Yaho’el mediates Abraham’s question. But it is an interesting sort of mediation, as indicated by the following summary of the conversation flow:

4.       Abraham addresses Satan but only when and how Yaho’el instructs him to. Later, in 14:9, Abraham slips up and addresses Satan directly, for which he is sharply rebuked by Yaho’el.

Satan contrasted with the prophet. In both accounts, Satan’s attempt to disguise his identity is recognized. Lacking divine glory and heavenly inheritance, the Devil is easily and humiliatingly exposed.7

Documenting related instances of the Adversary’s deception, the Apostle Paul, drawing on early Jewish tradition,8  spoke of Satan transforming himself “into an angel of light.”9  With similar language, Joseph Smith also spoke of the Devil having appeared deceptively “as an angel of light.”10

Michael Stone sees a passage in the Latin Life of Adam and Eve as implying that “all Satan lacked to look like a heavenly angel was the glory. He lost the glory when he fell, and he could take it on temporarily in order to deceive Adam and Eve.”11  Thus, Satan is depicted in illustrations of the temptation of Christ, as elsewhere in early Christian art, as angelic in form but differing in color—e.g., appearing with “false glory” in a blue tint rather than in a bright whiteness of glory.12 Alternatively, one might interpret Satan’s blue color as his appearing, deceptively, in a form corresponding to the blue robe of the high priest, a robe which represented being clothed in the likeness of the body—the blue-black “shadow”—of the incarnate Logos.13

Moses, having received a taste of the celestial heights, had already learned to distinguish God’s glory from Satan’s pale imitation.14  He challenged the Adversary, saying: “Where is thy glory, for it is darkness unto me? And I can judge between thee and God.”15

Satan told to depart and cease his deception. In similar terms, the Book of Moses and ApAb both relate a first command for Satan to depart. Both accounts specifically admonish him not to engage in further deception. In ApAb, as previously, Yaho’el mediates Abraham’s dialogue with Satan.

The prophet received the glory that Satan lost. Satan is reminded that the glory he previously possessed now belongs to the prophet. Moses’ words constitute a second “humiliating exposure of Satan” as an enemy rather than a son of God—reminding him of the divine declaration that Moses “actually is what his adversary falsely claims to be.”16  In ApAb, Satan’s false pretensions and the prophet’s right to glory are both confirmed by the affirmation of Yaho’el that Satan’s heavenly garment is now reserved for Abraham17  and that his erstwhile glory will be exchanged for Adam’s bodily “corruption.”18

Satan told to depart a second time. In both texts, Satan is again forcefully told to leave with no further discussion. Moses curtly commands, “Depart hence, Satan,” while in ApAb he is told: “Vanish from before me!”—or, in Rubinkiewicz’ translation, “Get away from me!”19

Satan’s final attempt to win the prophet’s worship. In ApAb, Abraham momentarily gives in to Satan’s ploy to continue the dialogue, answering him deferentially: “Here am I, your servant!”20  To ward off further danger, the angel gives Abraham a stern warning: “Answer him not! … lest his [i.e., Satan’s deceptions] will affect you.”21  In the Book of Moses, the goal of Satan’s demand is expressed more directly: “Worship me” (Moses 1:19).

Significantly, the cosmic battles depicted in Moses 1 and ApAb are not head-on clashes between the titanic forces of opposing gods or demi-gods. Rather, they are the conflicts of mortals who are caught between those forces, being compelled to choose by devilish adversaries while at the same time being enabled to stand by heavenly powers. Marc Philonenko’s analysis of this unusual aspect of ApAb applies equally well to Moses 1:22

The interaction between the [good and malevolent powers] does not occur directly but rather through a medium of a human being — Abraham. … Abraham thus becomes [the] place of … battle between two spiritual forces. … In [this] struggle … the Prince of Lights and the Angel of Darkness are fighting in the heart of a man.

Satan’s definitive departure following the invocation of the name of the Son of God. In contrast to Satan’s warrantless demand, Moses executes his authoritative command; forcing his adversary to depart through the power of the priesthood after the order of the Son of God.23  The dramatic turning point of this episode hinges on Satan’s desperate, false claim to be the Only Begotten, countered by Moses’ triumphant invocation of the name of the true Only Begotten.

No corresponding passage is found in ApAb. However, a medieval Ethiopian text provides a relevant parallel. As in Moses 1, it argues the potency of the name of God in driving Satan away. In an account of the battle between Satan’s rebellious armies and the hosts of heaven, the angels twice charged Satan’s ranks unsuccessfully. However, prior to their third attempt, they were given a cross of light inscribed “In the Name of the Father, and the Son, and the Holy Spirit,” and “when Setna’el [Satan] saw that inscription he was vanquished.”24

This article is adapted from Bradshaw, Jeffrey M., David J. Larsen, and Stephen T. Whitlock. “Moses 1 and the Apocalypse of Abraham: Twin sons of different mothers?” Interpreter: A Journal of Latter-day Saint Faith and Scholarship 38 (2020): 179-290.

Barker, Margaret. The Gate of Heaven: The History and Symbolism of the Temple. London: Society for Promoting Christian Knowledge (SPCK), 1991.

Malan, Solomon Caesar, ed. The Book of Adam and Eve: Also Called The Conflict of Adam and Eve with Satan: A Book of the Early Eastern Church. Translated from the Ethiopic, with Notes from the Kufale, Talmud, Midrashim, and Other Eastern Works. London, England: Williams and Norgate, 1882. Reprint, San Diego, CA: The Book Tree, 2005.

Orlov, Andrei A. “The garment of Azazel in the Apocalypse of Abraham.” In Dark Mirrors: Azazel and Satanael in Early Jewish Demonology, edited by Andrei A. Orlov, 47-81. Albany, NY: State University of New York Press, 2011.

Stone, Michael E. Adam’s Contract with Satan: The Legend of the Cheirograph of Adam. Bloomington, IN: Indiana University Press, 2002.

Witherington, Ben, III. Conflict and Community in Corinth: A Socio-Rhetorical Commentary on 1 and 2 Corinthians. Grand Rapids, MI: William B. Eerdmans, 1995.

15 Moses 1:15, emphasis added. Similarly, in the Conflict of Adam and Eve with Satan, God warns Adam and Eve about Satan, saying: “This is he who promised you majesty and divinity. Where, then, is the beauty that was on him? Where is his divinity? Where is his light? Where is the glory that rested on him?” (S. C. Malan, Adam and Eve, 1:51, p. 56). Orlov describes the very face or countenance of the Devil as being clothed with darkness, while the face of the glorified visionary is bathed in light (A. A. Orlov, Garment of Azazel, p. 79).

Joseph Smith also had to learn “by experience, how to discern between the spirit of Christ and the spirit of the Devil (O. Cowdery, Letter 8, p. 200, spelling and capitalization modernized). According to an account by Oliver Cowdery, the Prophet, prior to obtaining the Book of Mormon plates, “beheld the prince of darkness, surrounded by his innumerable train of associates” and afterward was told the purpose of this vision by the angel Moroni: “All this is shown, the good and the evil, the holy and impure, the glory of God and the power of darkness, that you may know hereafter the two powers and never be influenced or overcome by that wicked one” (ibid., p. 198).

23 The rhetorical complexity of Moses 1:20–21 seems deliberate. In v. 20, Moses received strength after calling upon God. In v. 21, these events are reported in reverse order. Rather than seeing in vv. 20–21 two instances of the same command for Satan to depart, we would suggest that the threefold report (calling upon God, receiving strength, command to depart) in the two verses is a description of the same event, repeated twice for emphasis. The description of the command to depart in verse 20 highlights the exclusivity of Moses’ worship and the corresponding description of the same event in verse 21 underlines the use of the name of the Only Begotten as part of the formal command.