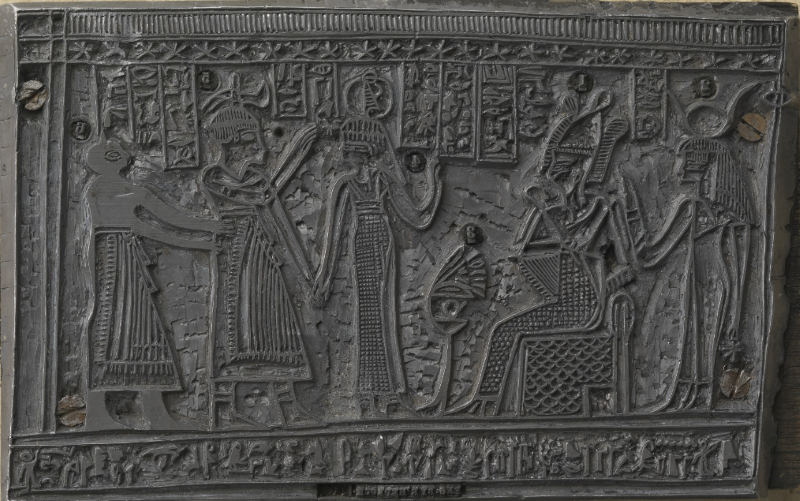 Facsimile 3 of the Book of Abraham has been identified in the past by Egyptologists as “a constantly recurring scene in Egyptian literature, best known from the 125th chapter of the Book of the Dead. It represents the judgment of the dead before the throne of Osiris.”1 Based on comparable iconography from other Egyptian funerary texts, this understanding of Facsimile 3 has been prevalent among Egyptologists.2 “The formal judgment of the dead contained in BD spell 125 . . . involves the deceased supplicant making a ‘negative confession’ asserting his or her faultless behavior on earth in the presence of forty-two gods assembled in the Hall of the Two Truths, while the heart is weighted against the feather of Maat.”3 This judgment scene very frequently is depicted as transpiring before the presence of the god Osiris, who is often shown sitting on a throne accompanied by his sisters/wives Isis and/or Nephthys.

Although this interpretation of Facsimile 3 has become commonplace among scholars, some have raised considerable objections to this explanation. Egyptologist John Gee, for instance, has voiced problems with viewing Facsimile 3 as a judgment scene.4 “The problems with the theory that Facsimile 3 is the vignette from Book of the Dead 125 can be most readily shown” by what is missing in Facsimile 3.5 Several ancient copies of the Book of the Dead either visually illustrate or textually describe what the ancient Egyptians themselves considered the essential elements needed for a judgment scene. This includes, according to one copy of the Book of the Dead from the first century AD:

The forty-two gods [in front of] the deceased above the hall of the truths; a figure of Hathor, [lady] of the underworld carrying a was-scepter, protecting the man, while the two arms of the scale are straight and Thoth is on its left, to the right of its [. . .] while Horus speaks, and Anubis grasps it on the side on which are the two truths (Maats) while he is opposite on the other side of the scale. Thoth reads the writings since a scroll is in his hand [. . .Ammut] in whose hand is a knife and before whom are a sword and a scepter, Anubis holding his hand. A lotus with two supports on which are the four sons of Horus. A chapel in which Osiris sits on his throne there being an offering table with a lotus before him. Isis is behind him praising, and Nephthys is behind him praising.6

“If we compare this description with Facsimile 3,” observes Gee, “we find that the description does not match at all.”

Facsimile 3 lacks the forty-two gods. It is missing Hathor holding the was-scepter. There is no balance-scale. Thoth is missing from the left side of the nonexistent scale. Horus is missing. The figure generally identified with Anubis is not grasping the side of the scale, but the waist of the man. Since Thoth is not depicted, he cannot be shown reading anything. Ammut is absent, along with the knife, sword, and scepter. The lotus is missing the four sons of Horus atop it. Though Osiris is shown sitting, he is not depicted seated within any chapel. Almost all of the elements which the Egyptians thought were important for the scene are conspicuous by their absence from Facsimile 3. Significantly, these elements are present in a vignette accompanying Book of the Dead, chapter 125, found among the Joseph Smith Papyri, as well as other copies of vignettes of Book of the Dead, chapter 125. These elements are present in all the judgment scenes that the critics would compare with the Facsimile 3. The elements of the judgment scene as listed in the Demotic Book of the Dead are consistent with those of earlier judgment scenes. Their absence from Facsimile 3 indicates that Facsimile 3 is not a judgment scene and is not directly associated with Book of the Dead 125.7

In fact, when compared with other throne scenes from the Book of Breathings, Facsimile 3 contains a number of anomalous artistic elements that are not standard in other illustrations, and its original placement on the papyrus scroll obtained by Joseph Smith is likewise not standard for this type of text. So while “the type of scene with which Facsimile No. 3 compares best is that of the Presentation scene, which features the deceased being introduced into the presence of Osiris by one or more other Egyptian deities, . . . there are several challenges with placing Facsimile No. 3 into this category.”11

If Facsimile 3 is indeed closer to a presentation scene than a judgment scene, then it might have a plausible connection with astronomy. “Parallel scenes on Egyptian temples are explicitly labeled as initiations. Known initiation rituals from Greco-Roman Egypt include instruction in astronomy as part of the initiation.”12  This converges with Joseph Smith’s interpretation that this scene depicts Abraham “reasoning upon the principles of Astronomy, in the king’s court.”

Until further work can shed more light on this fascinating but complex matter, we will have to be content for now that “although Facsimile No. 3 was attached to the Hor Book of Breathings, it is anything but a common funerary scene from that collection of texts.”13

Quinten Barney, “The Neglected Facsimile: An Examination and Comparative Study of Facsimile No. 3 of The Book of Abraham,” MA thesis, Brigham Young University, 2019.

2 See for instance Franklin S. Spalding, Joseph Smith, Jr., As a Translator (Salt Lake City: Arrow, 1912), 24, 26; Robert K. Ritner, The Joseph Smith Egyptian Papyri, A Complete Edition: P. JS 1–4 and the Hypocephalus of Sheshonq (Salt Lake City, UT: The Smith-Pettit Foundation, 2011), 138. Klaus Baer opined in 1968 that Facsimile 3 was “a scene [that] comes from a mortuary papyrus and is similar to, but not identical with scenes showing the judgment of the deceased before Osiris” in Book of the Dead Spell 125. Klaus Baer, “The Breathing Permit of Hôr: A Translation of the Apparent Source of the Book of Abraham,” Dialogue: A Journal of Mormon Thought 3, no. 3 (Autumn 1968): 126.

3 Peter F. Dorman, “The Origins and Early Development of the Book of the Dead,” in Book of the Dead: Becoming God in Ancient Egypt, ed. Foy Scalf (Chicago, Ill.: Oriental Institute, 2017), 39.

8 Quinten Barney, “The Neglected Facsimile: An Examination and Comparative Study of Facsimile No. 3 of The Book of Abraham,” MA thesis, Brigham Young University, 2019.