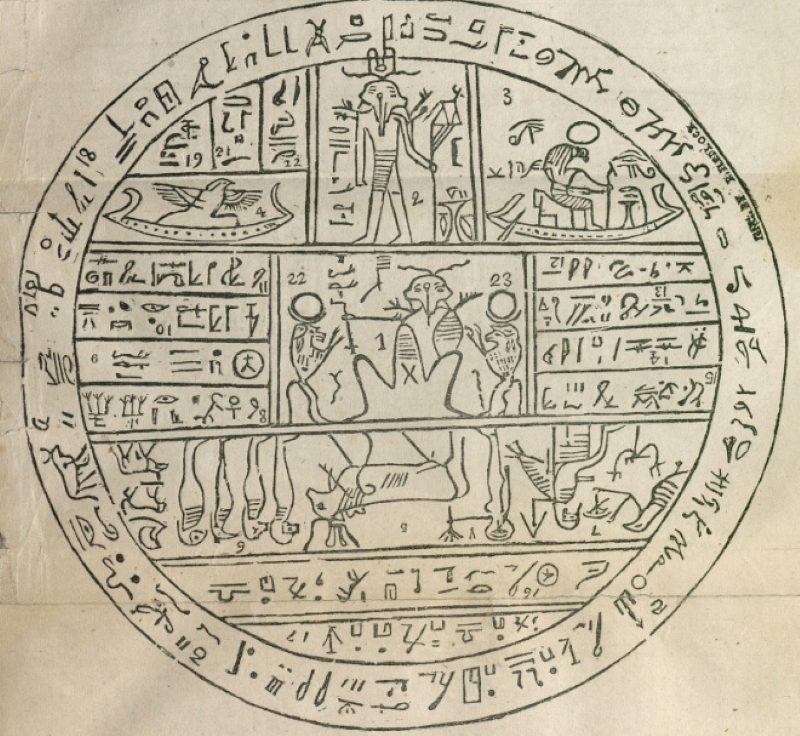 Facsimile 2 of the Book of Abraham is a type of document called a hypocephalus. “The term hypocephalus refers to a piece of Late Period and Ptolemaic [circa 664–30 BC] funerary equipment. It is specifically an amuletic disc made of cartonnage, bronze, textile, or rarely from papyrus and even wood, emulating a solar disc.”1 The name was coined by modern Egyptologists beginning with Jean-François Champollion and comes from Greek, meaning literally “under the head.”2 Spell 162 of the ancient Egyptian Book of the Dead specifies that these amulets were to be placed ẖr tp of the mummy, which has been widely rendered as “under the head” of the mummy. A more technically correct translation of the Egyptian phrase appears to mean “at the head” or “besides the head” of the mummy, meaning at very least in some proximity to the deceased.3

Today there are 158 known hypocephali which have been catalogued and/or published.4 Based on their attested chronological and geographical distribution, “it is clear that the hypocephalus [did] not become a widespread funerary object” in ancient Egypt. Instead they “remained exclusive pieces of funerary equipment reserved for the high clergy and for the members of their families who occupied” high-ranking positions in the temple, especially the temple of Amun at Karnak, the temple of Min at Akhmim, and the temple of Ptah at Memphis.5 Although hypocephali themselves appear to be later creations, the mythological and cosmological conceptions contained in hypocephali have apparent forerunners in earlier Egyptian texts.6

According to Spell 162 of the Book of the Dead, hypocephali served a number of important purposes: to protect the deceased in the afterlife, to provide light and heat for the deceased, to make the deceased “appear again like one who is on earth” (that is, to resurrect them), and to ultimately transform the deceased into a god.7 Hypocephali were also conceived of (and even sometimes explicitly identified as) the magical eye of the sun god Re that consumed enemies with fire. Their circular shape and function to provide light, heat, and protection naturally lent themselves to this conceptualization in the minds of the ancient Egyptians.8

While these might perhaps have been the primary purposes of hypocephali, it is clear from the explanatory rubric of some copies of Spell 162 of the Book of the Dead and from other surviving evidence that they also served non-funerary roles. For example, hypocephali or objects that served the same purpose as hypocephali were used as divinatory devices in the Egyptian temple and as astronomical documents.9 This is especially significant since Joseph Smith’s interpretation of Facsimile 2 draws connections to the temple and features several astronomical elements. Hypocephali also shared a conceptual link with temple gates. In this capacity they served, among other things, to keep out enemies and admit friends into sacred space and shared a focus on creation motifs.10 Once again, this parallels some of Joseph Smith’s explanations of Facsimile 2 which emphasize creation.

In summary, while hypocephali served a number of important religious and ritual purposes for the ancient Egyptians, they ultimately “point[ed] toward the Egyptians’ hope in a resurrection and life after death as a divine being.”11

Finally, it is noteworthy that there appears to have been ancient connections between Abraham and the hypocephalus. For example, in one Egyptian papyrus Abraham is referred to as “the pupil of the wedjat-eye” and associated with the primeval creator god (PDM xiv. 150–231).12 “The hypocephalus, based on the representations of [the creator god] Amon in the centre panel of the disc, is, according to the ancient Egyptian theory, identical with the pupil of the wedjat-eye.”13

Michael D. Rhodes has also drawn attention to a possible allusion to the hypocephalus in an extra-biblical text that prominently features Abraham.

The Apocalypse of Abraham describes a vision Abraham saw while making a sacrifice to God. In this vision he is shown the plan of the universe, “what is in the heavens, on the earth, in the sea, and in the abyss” (almost the exact words used in the left middle portion of the Joseph Smith Hypocephalus). He is shown “the fullness of the whole world and its circle,” in a picture with two sides. The similarity with the hypocephalus is striking. There is even a description of what are clearly the four canopic figures labeled number 6 in the Joseph Smith Hypocephalus. The significance of these documents is that they date from the beginning of the Christian era—they are roughly contemporary with the hypocephalus and the other Egyptian documents purchased by Joseph Smith—and they relate the same things about Abraham that Joseph Smith said are found in the hypocephalus and the other Egyptian papyri.14

Besides being interesting and informative in its own right, understanding the purpose and function of the ancient Egyptian hypocephalus is therefore crucial to evaluating Joseph Smith’s interpretation of Facsimile 2 and help readers of the Book of Abraham better appreciate why such a document might have been appropriated by the Prophet to illustrate Abraham’s record.